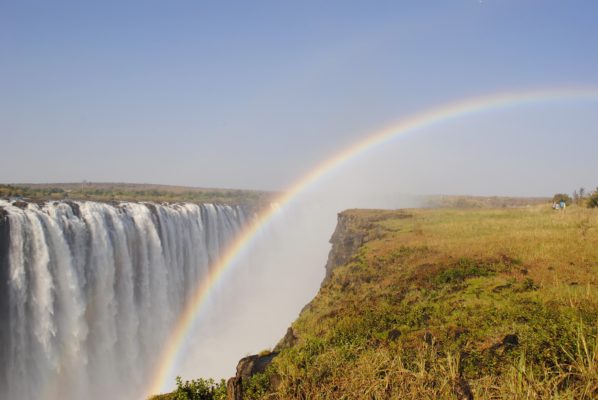 Tucked away in a filing cabinet I have Robert Mugabe’s autograph. What to do with it now?

When I met him in 1983 he was the hero of the nation and Zimbabwe was a country of natural wealth and unbridled optimism. The maize was standing tall, the sable ran proud and elegantly through the African bush and the elephant and rhino populations were burgeoning.

He had come to Kadoma, where I lived, to open the newly electrified railway linking the town to the capital Harare. In the evening the ruling party, ZANU PF, held a fundraising dinner in the local Town Hall.

Mugabe was basking in the glow of a very very very long speech from Minister for Transport, Comrade Sibanda, to rapturous applause, extolling the virtues of the socialist revolution, when I walked up to his table and introduced myself.

He was visibly taken aback to have me at his table, perhaps wondering why I hadn’t been intercepted by one of his minders. I told him what a great man he was, a model leader, an inspiration to the rest of Africa. He thanked me, I shook his hand and he signed my menu.

As a solid leftie myself, I was in awe of Comrade Mugabe, the freedom fighter and self proclaimed  Christian Marxist who had led the forces of ZANLA to victory in the thirteen year civil war. Now he was the consummate politician, publicly talking up socialism while persuading the white farmers and multinational mining companies behind closed doors to stay and invest in the prosperity of Zimbabwe. Tragically, he would break this trust in 2000 with a brutal takeover of white farming land.

I had come to Zim as one of more than 400 Aussie teachers to take up teaching contracts between 1982 and 1987. We were participants in an aid program inspired by Malcolm Fraser, a great supporter of Mugabe and black independence.

We went as unemployed teachers needing work, we went for the adventure. Some of us went to be part of the Zimbabwean socialist revolution, flag carriers for social justice and black independence, dream weavers for young Zimbabweans experiencing high school education for the first time.

For my students everything was possible. Even those in 3A14, the lowest year nine equivalent, dreamed of being doctors, lawyers, politicians, engineers and teachers. Some, showing a sharp sense of humour, imagined well paid government jobs where they would wear suits and ties or elegant dresses and be paid handsomely to sit behind a desk all day and do nothing.

Education was the ticket out of a life in the communal lands living in one room adobe and thatch housing and scratching away at hard, unforgiving soil for a subsistence living growing mealies(maize).

But the dream quickly began to fade. It didn’t take long to realise we were educating our students for unemployment. There simply weren’t enough jobs to absorb all the young Zimbabweans coming out of high school.

And behind the socialist rhetoric of the National Unity government, bringing together Mugabe’s majority Shona ZANU PF party with Joshua Nkomo’s minority Ndebele ZAPU, was a ruthless determination to suppress any dissent.

Demonstrating his chameleon pragmatism, Comrade Mugabe had promised black freedom fighters that white farming land would be transferred to them after independence. When this didn’t materialise former soldiers loyal to Nkomo started making demands. At one point this included the kidnapping and murder of Aussie and Kiwi overland travellers to press their point. Mugabe responded by sending his Fifth Brigade thugs into Matabeleland in the south of the country to suppress the ‘dissidents’, while imposing a media ban on any reporting of the atrocities. I only knew about what was going on by listening to the BBC.

Between 1982 and 1987 Mugabe was responsible for the rape, torture and murder of 20,000 Ndebeles in what would become known as Gukurahundi, the ‘early rain that washes away the chafe’.

Since those days things have only gotten worse. Like everybody else interested in the fate of Zimbabwe, I have watched in despair and horror as AIDS devastated the country in the 80s and 90s, reducing life expectancy to 38, and Mugabe’s corrupt and brutal government trashed the country, turning maize fields to dust, emptying the supermarkets, robbing government coffers, bulldozing poor townships, imprisoning and torturing opponents and presiding over the worst hyperinflation in history that has made a trillion Zim dollars worth sixty cents.

I am angry and I am sad. For the students I taught who Mugabe betrayed, whose dreams were never allowed to flourish. I wonder if they are even alive. I did hear from one recently. Wadzanayi from 2A6 tracked me own through Facebook. She described an impossibly difficult day to day existence. No job, three kids, no father and no social security. I sent her money and she texted me back showing the Zimbabwean love of a pithy saying: God bless you Phil. May your days be numbered. They don’t always get it exactly right.

With Mugabe gone let’s hope the next generation of Zimbabweans will be allowed to dream. I’ll keep his signature as a reminder of the brutality a leader with absolute power is capable of.

Pamberi ni Zimbabwe. May your days be numbered. You know what I mean.