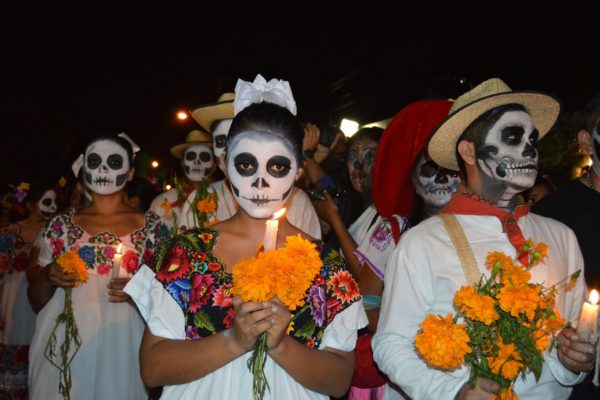 The Mexican Day of the Dead festival, El Dia de los Muertos, is a reminder that the dead are always with us. Whether we have a spiritual tradition that believes in the eternal life of the spirit or soul, or take a more rational view that there is no life in any form after death and that we simply return to dust, departed loved ones live on in our hearts and memories.

The festival is also a reminder that while death is an occasion for sadness and grieving it is also an occasion for celebrating life. It encourages us to not only remember our dead loved ones in our prayers and meditations, but eat, drink and dance with them as well.

El Dia de los Muertos dates back to pre-Hispanic civilizations from 2,500 to 3,000 years ago. It coincides with European All Saints Day and modern day Halloween but has more gravitas and humour. The spirits do not come to haunt families but to be with them. It is an occasion for family gatherings in cemeteries, celebrations in the home, dressing up as skeletons and parading through the streets, solemn masses and irreverent satirical poetry about politicians and other public figures.

If we entered into the Mexican spirit, we would be writing biting satire about Turbo, Showbag, People Skills, Mr No Interest for Twelve Months and Tubbie and publishing them in national media outlets without fear of defamation or without the need to resort to troll like abuse. Everyone is fair game and it is all good fun.

I remember sitting in a cemetery in Oaxaca before midnight on the 31st. I was with Amalia, a Mexican woman in her seventies I’d met that afternoon as she was clearing her father’s gravesite of weeds and decorating it with marigolds in preparation for the occasion. As the wind picked up I tried to embrace the mysticism of the occasion.

‘The children are on their way,’ I said.
She looked at me as she would any silly gringo.
‘No, it’s just the wind.’

That evening the cemetery of Xoxocotlan had been turned into a place of celebration as families gathered around the graves of loved ones that they had turned into altars, adorning them with objects that symbolized the dearly departed: photographs, fruit, pan de muerto- bread in the shape of a skull, toy figures of skulls and skeletons, luminescent marigolds and candles to guide the spirits home.

In Mexico the dead are never really dead. This is even captured in the Spanish language. To say someone is dead you use the impermanent form of the verb ‘to be’: el esta muerte. He is dead but not forever. Life is eternal and there is always next year.

Mexicans have more than one hundred names for death. Catrina is the most recognizable and omnipresent. She is depicted in paintings and ceramic artwork as a skeleton with thick black hair, normally wearing a colourful, traditional Mexican dress, sometimes a stylish wide brimmed hat.

Other names are more irreverent. The Bald One, The Smelly One, Big Head, Smiley, Big Teeth to name a few.

The different ideas about death are captured with humour. Death is renunciation: To turn in one’s driver’s license or To turn in one’s tennis shoes. Death is also departure: To move to the Valley of the Bald, To elope with the Skinny One, To have a rendezvous with Smiley or Big Teeth.

The next day I went to a different cemetery where families were gathered eating tortillas and pan de muerto, drinking Mezcal and cerveza, playing music on ghetto blasters, generally whooping it up.

As families partied, I leaned against a headstone chatting with a local about Mexican politics and drug cartels. Chatting about corruption and death. I wandered off to one corner of the cemetery to listen to a Catholic priest giving a service about respecting our ancestors that revived memories of my mother, moving me to tears.

That is the Day of the Dead: serious, solemn, festive, sentimental and irreverent.

The message is clear. Treat death with the respect it deserves but don’t be fearful. Death may be sombre and sad but it is also an opportunity to celebrate life. Learn to look it in the face and laugh. And when it is your turn to meet Smiley do so with a joke and smile back.